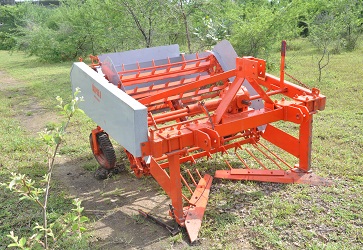 Sanjay has five acres of cultivable land where groundnut is grown mainly. While working in the field he observed the difficulties faced by farmers to dig the groundnut. He often used to discuss with them about these. The main points that came out of the discussions were high labor cost and lack of availability of labor, which would result in huge losses. It was sometime in 2007 that Sanjay decided to develop a device to dig groundnuts. Initially, he made a hand operated plough but its efficiency was quite low and was labour intensive as well. Then he developed a tractor operated plough using which he observed that the groundnut pods got broken or were left in the ground. We agin went back to the farmers with all his learnings and had discussions with them. Working persistently, he was able to develop a prototype in 2009. After its trial, he just had to add two wheels under the conveyor for vibration and the machine was able to do what it was designed to. He mentions about the testing period of development that it was important for him to believe in himself and his concept even though the results were otherwise. His elder brother and one of his friend were instrumental in supporting him by sharing their feedback and suggestions.

This is a tractor mounted PTO powered machine with a telescopic propeller shaft suitable for tractors of 35 HP and above to dig out and uproot the groundnut. Groundnuts are uprooted from the soil with the help of the harvesting blade (V shaped) of the machine. The blade has been hardened by treating at very high temperature in oil and can work in different kinds of soil. It has an adjustable width and penetration angle can be varied. The uprooted groundnuts are conveyed from ground level to a a higher level for collection using a conveyor belt. The belt keeps vibrating as a result of which the pods get cleaned of the attached soil. Opening the collection box forms the spread bed of groundnut for drying. As the machine is heavy, wheels have been provided at the rear to reduce the load on the tractor. Though the productivity of machine depends on the type of the soil, but on an average the machine can harvest about 3 to 4 Veegha (0.4 Acre) per hour. In comparison to other alternatives, this machine not only mechanises the digging but also undertakes cleaning and drying as well. Other alternatives commonly used are single offset beam digger and the manual pulling of groundnut. In the latter, three to five persons are required for pulling out plants, which have been dug and additionally other process such as cleaning (removing soil from plants) has to be done manually. In the single offset digger, digging is done mechanically and subsequently, the pods are collected manually. This machine saves considerable labour, operating time and cost of operation compared to conventional methods. Moreover, this one machine can be used in different kinds of soil. The testing of the device was done at CAET, Junagadh Agricultural Univesity, Junagadh where the results were found to be appreciable.

A Farmer to An Enterprenuer

Sanjay has started selling the ground nut digger and has managed to sell a few units. It seems to have good potential in the market as per the feedback of both the farmers and experts. While working on the ground digger, Sanjay also realised that as this machine had a season based demand, he needed to diversify. This made his develop another innovative tool â€“ the reversible ploughs, which are also attached to the tractor. He has made different models of these ploughs viz. manual, machine, hydraulic operated and a fgew more. He started selling them few months back and has managed a decent sale since then. Presently, Sanjay is actively engaged in fabricating and improving the digging machine, which he plans to make suitable for multiple crops. He also keeps a dream to become a successful businessman selling different agriculture devices so that farmers can have access to good quality machines at a reasonable price.