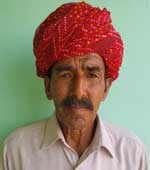 Developing the groundnut digger
Sometime in 1995, some farmers of their region bought blades for digging groundnuts. The brothers saw its performance and found that a significant per cent of nuts remained in the field after the digging using blade was done. They then thought to develop a ground nut digger, which could reduce this loss. As they did not have a tractor then, they hired one for about seventeen days, so that they can try the machine they develop in the field. Initially, they developed a digger powered by a stationary Kirloskar engine with the tractor pulling the entire assembly. It was tested in about twenty bighas of land where they noticed that the engine broke down due to accumulation of dust. As a result of this, they removed the engine from the digger and attached it to the PTO of tractor, which they purchased in 1996. Later they also provided a pressure jack at the front of the wheels of groundnut digger. But this model did not succeed as its power and fuel consumption was high. The ground digger was further modified and in the next version, groundnuts were uprooted from the soil with the help of the harvesting blade of the machine. The uprooted groundnuts were then conveyed from ground level to a higher level for collection using a conveyor belt. The belt kept vibrating as a result of which the pods got cleaned. But this model also could not succeed in their region.

Having not being able to finalise the design, the brothers went back to an earlier design, and decided to improve upon the tractor PTO operated groundnut digger. They modified the existing groundnut digger by providing horizontal rotary blade along with horizontal fixed blade. Through this modification uprooted groundnut from fixed blade got separated from soil clods. They tested it in about 25 beegha of land but the design got copied by other manufacturers from Ladnu and Bikaner. However, during testing, they had noticed that the power and fuel requirements of the digger were quite high. So they further modified it (sometime in 2012) by providing another horizontal rotary blade rotating in opposite direction to the existing rotary blade.

The groundnut digger
The machine is a tractor mounted, PTO powered groundnut digger, which is lighter with better weight distribution and has double beaters to reduce load on the engine.

The digger has a self-made frame, a telescopic propeller shaft, gear box, belt and pulleys for speed reduction, rotary shafts having blades, vibratory sieves, etc. The machine can be fitted with standard 540 rpm PTO. The main rotor which digs the land rotates at a speed of 500 rpm, while the secondary rotor shaft rotates at 250 rpm in opposite direction. It helps in breaking the soil lumps easily and prevents foreign material and lumps to enter towards the main roller. The other performance parameters of the digger are as follows: cutting width: 5 feet 1 inch (1.55 m); working depth: 4 inch (0.1 m); field capacity: 1 beegha per 2 to 2.5 hours; digging capacity: 500 kg per beegha; fuel consumption: 2 to 2.5 lit per hour. The weight of the digger is about 550 kg and minimum 35 hp tractor is required for operation, with negligible extra maintenance cost.

This tractor mounted harrow seed drill consists of a gang of discs (11 in the present prototype), ground wheel, seed box, agitator for preventing bulging, vertical disc type seed metering mechanism, chain and sprocket for transmitting power from ground wheel to seed metering mechanism, seed box, fertilizer box, etc. The row to row spacing is maintained at 20 cm (average) while plant to plant spacing can be adjusted by the change in the speed of operation. For changing the depth of seed placement, angle of pipe can be changed. A covering has been attached to cover the seed, which otherwise get eaten by birds, rats or insects. The other performance parameters of the digger are as follows: cutting width: 6 feet (1.83 m); working depth: up to 3 to 4 inch (0.07 to 0.1 m); field capacity: 2 beegha per hour, fuel consumption: 2 lit per hour. Minimum 35 hp tractor is required for operation, with negligible extra maintenance cost.